The above pic of a statue in the city of Worms, Germany.

500 years ago, Martin Luther nailed his thesis of 95 grievances to the door of the Wittenberg Church. We celebrate that day as the birth of the Protestant Reformation. You can read the list of his grievances here.

In those days the Roman Catholic Church was a very controlling and corrupt force. The clergy convinced the public that they (the pope and the clergy) had the decision-making power as to who would go to hell or heaven. Money spoke. Anyone with money, religious or not, could buy their way out of purgatory and into heaven. The church was pretty powerful in convincing the poor to give their last dime to the church in order to save their souls. This is only one example of many that were problematic in the church.

Martin Luther spent a few years as a monk searching for truth and for a personal relationship with God. As he searched the scriptures he saw many inconsistencies and inaccuracies in the church. He left the priesthood and enrolled at the University of Wittenberg eventually becoming a professor of theology. While preparing for his lectures and studying the Bible, he came to realize that salvation comes through faith, not by works. Salvation could not be determined by the pope or by any priest or any man, but rather only through a personal relationship with Jesus Christ. Furthermore, he determined that the pope did not have the sole right to interpret scripture, but rather that each person should have access to the written scripture so that they could determine the truth for themselves.

He wrote a thesis detailing his perception of the inaccurate beliefs preached by the Roman Catholic Church and nailed this thesis to the door of the Wittenberg church. At a special trial in Worms, Germany (called the Diet of Worms), he was convicted as a heretic and excommunicated. Threatened with arrest and branded as an outlaw, his life was at constant risk. He spent the rest of his years as a fugitive.

This year I was fortunate to travel to Germany where we stopped in Worms and I was able to get some pictures of the church there and several statutes of some of the Fathers of the Reformation. Unfortunately, we did not have a guide in this city, so we were unable to interpret many of the inscriptions on the statutes and graves inside the church.

A few pics of the church in Worms, Germany. 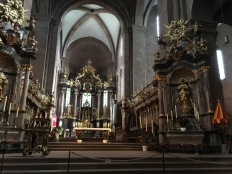 A few days later, we were in Geneva, Switzerland and visited the Museum of the Reformation. We were not permitted to take any pictures inside the museum, but the pictures below are of the area around the museum.

I read that the original Protestant churches met in secret in caves in the mountains around the city of Geneva during these early years of change. There is one cave that can be visited and is still set up as a chapel. However, access to that site is very difficult, requiring a car and good set of hiking boots. We didn’t have time to scout this out.

A few pics of the area around the Museum of the Reformation in Geneva, Switzerland. 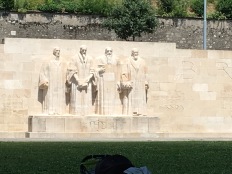 This entry was posted in Between Me and God. Bookmark the permalink.